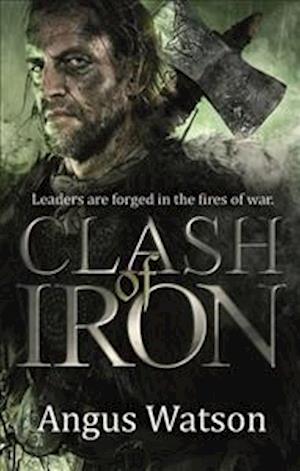 LEADERS ARE FORGED IN THE FIRES OF WARIron Age warriors Dug and Lowa captured Maidun castle and freed its slaves. But now they have conquered it, they must defend it.A Roman invasion is coming from Gaul, but rather than uniting to protect their home, the British tribes battle each other - and see Maidun as an easy target.Meanwhile, Lowa's spies infiltrate Gaul, discovering the Romans have recruited bloodthirsty British druids, and Maidunite Ragnall finds his loyalties torn when he meets Rome's charismatic general, Julius Caesar.War is coming. Who will pay its price?For more epic action from Angus Watson, check out:West of West TrilogyYou Die When You DieThe Land you Never LeaveWhere Gods Fear to GoThe Iron Age TrilogyAge of IronClash of IronReign of Iron

Forfattere
Bibliotekernes beskrivelse Bloodthirsty druids and battle-hardened Iron Age warriors collide in the second volume of this action-packed historical fantasy trilogy which will appeal to fans of Joe Abercrombie and HBO's Game of Thrones. The first volume of this trilogy, Age of Iron, is currently shortlisted for the 2015 David Gemmell Award.