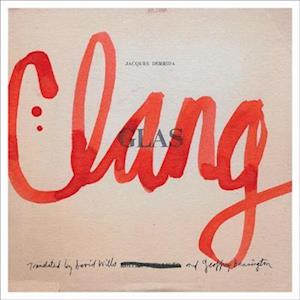 A new translation of Derrida's groundbreaking juxtaposition of Hegel and Genet, forcing two incompatible discourses into dialogue with each other Jacques Derrida's famously challenging book Glas puts the practice of philosophy and the very acts of writing and reading to the test. Formatted with parallel texts, its left column discusses G. W. F. Hegel and its right column engages Jean Genet, with numerous notes and interpolations in the margins. The resulting work, published for the first time in French in 1974, is a collage that practices theoretical thinking as a form of grafting. Presented here in an entirely new translation as Clang-its title resonating like the sound of an alarm or death knell-this book brilliantly juxtaposes Hegel's totalizing, hierarchical system of thought with Genet's autobiographical, carceral erotics. It innovatively forces two incompatible discourses into dialogue with each other: philosophical and literary, familial and perverse, logical and sensory. In both content and structure, Clang heightens the significance of all encounters across ruptures of thought or experience and vibrates with the impact of discordant languages colliding.