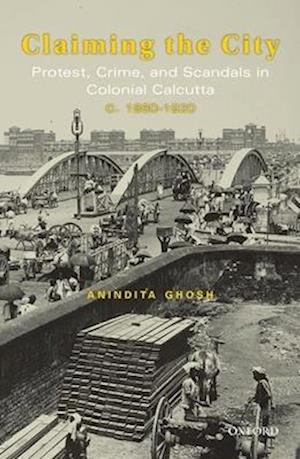 As the administrative and commercial capital of British India and as one of the earliest experiments in modern urbanization in the sub-continent, Calcutta proved enormously challenging to both its residents and its architects. In this imaginative study of colonial Calcutta, Anindita Ghosh charts the history of its urbanization from below- in its streets, strikes, and popular urban cultures. Claiming the City offers a close-up view of the citys underbelly by drawing in a range of non-archival sources- from illustrations and amateur photographs to street songs, local histories, and memoirs - which show that Calcutta was not just a problem to be disciplined and governed, as the colonialists would have us believe. Instead, the city emerges as a lively and crucial site for the shaping of the discourse on claims to urban spaces and resources by various marginal groups. Ghoshuses the everyday as a prism for exposing the wide spectrum of political and social imaginaries that shaped the city and shows how the once proverbial City of Palaces slowly turned into a city of endemic unrest and strife.