Civil Peace and the Quest for Truth 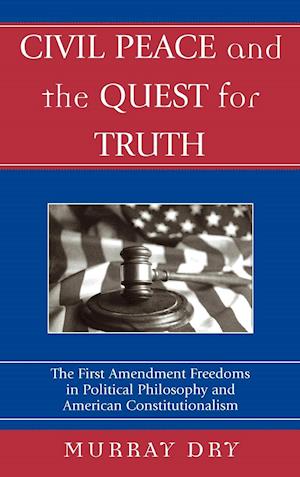 The freedoms of speech and religion assumed a sacrosanct space in American notions of civil liberty. But it was not until the twentieth century that these freedoms became prominent in American constitutional law; originally, the first ten amendments applied only to the federal government and not to the states. Murray Dry traces the trajectory of freedom of speech and religion to the center of contemporary debates as few scholars have done, by looking back to the American founding and to the classical texts in political philosophy that shaped the founders' understanding of republican government. By comparing the colonial charters with the new state constitutions and studying the development of the federal Constitution, Dry demonstrates the shift from governmental concern for the salvation of souls to the more limited aim of the securing of rights. For a uniquely rich and nuanced appreciation of this shift Dry explores the political philosophy of Locke, Spinoza, Montesquieu, and Mill, among others, whose writings helped shaped the Supreme Court's view of religion as separate from philosophy, as a matter of individual faith and not a community practice. Delving into the polyvalent interpretations of such fundamental concepts as truth, faith, and freedom, Civil Peace and the Quest for Truth immeasurably advances the study of American constitutional law and our First Amendment rights.