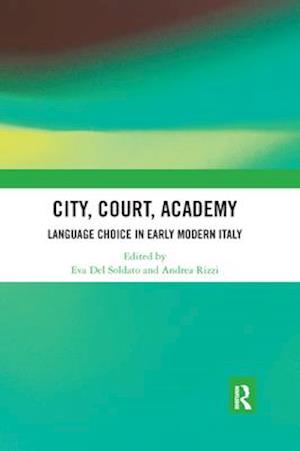 Originally published in 1999, this volume contains a systematic collection of both theoretical and applied studies on user information systems for road users. It is generally expected that reliable information offered to road users will improve the use of scarce capacity on transport networks but from a research perspective the question arises whether the provision of such hard and software will influence the behaviour of road users to such an extent that a more desirable traffic situation will emerge. The book contains European, American and Asian contributions and presents advances and findings in the field of theoretical, simulation and empricial models on driver information systems and behaviour, whilst also paying attention to the design of such systems.This volume focuses on early modern Italy and some of its key multilingual zones: Venice, Florence, and Rome. It offers a novel insight into the interplay and dynamic exchange of languages in the Italian peninsula, from the early fifteenth to the early seventeenth centuries. In particular, it examines the flexible linguistic practices of both the social and intellectual elite, and the men and women from the street. The point of departure of this project is the realization that most of the early modern speakers and authors demonstrate strong self-awareness as multilingual communicators. From the foul-mouthed gondolier to the learned humanist, language choice and use were carefully performed, and often justified, in order to overcome (or affirm) linguistic and social differences. The urban social spaces, the princely court, and the elite centres of learning such as universities and academies all shared similar concerns about the value, effectiveness, and impact of languages. As the contributions in this book demonstrate, early modern communicators - including gondoliers, preachers, humanists, architects, doctors of medicine, translators, and teachers-made explicit and argued choices about their use of language. The textual and oral performance of languages-and self-aware discussions on languages-consolidated the identity of early modern Italian multilingual communities.