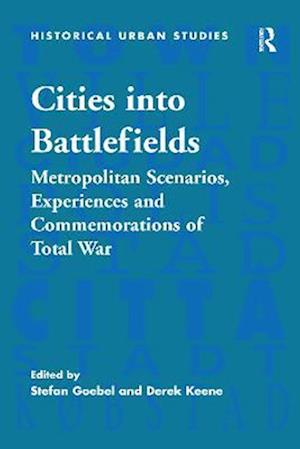 Cities have always had a key role in warfare, as strategic centres which periodically suffered the horrors of siege and sack. With industrialisation, however, they were drawn ever closer to the front line and to direct and continuous experience of fighting and destruction. 'Cities into Battlefields: Metropolitan Scenarios, Experiences and Commemorations of Total War' explores the cultural imprint of military conflict on metropolises world wide in the era of the First and Second World Wars. It brings together cultural and urban historians and scholars of related disciplines including anthropology, education, and geography. The volume examines how the emergence of 'total' warfare blurred the boundaries between home and front and transformed cities into battlefields. The logic of total mobilisation turned the social and cultural fabric of urban life upside down. Arranged so as to bring out the evolution of experience over time, the essays explore Eastern and Central Europe, Britain and Western Europe, and Japan and address several key themes. The first strand - scenarios - explores the apocalyptic imagination of intellectuals and experts in peacetime. Artists and writers anticipating doom presented the coming upheaval as an urban event - a commonplace of late-Victorian and post-1918 pessimism. On a different plane, civil servants and engineers materialised visions of urban chaos and devised countermeasures in case of emergencies. Both groups helped to furnish a repertoire of cultural forms which channelled and encoded the actual experience of war. The second strand deals with metropolitan experiences, notably mobilisation, deprivation, and destruction in wartime. Ruins and the repercussions of war is the central theme of the third strand - commemorations - which investigates post-war efforts to remember and forget. The quest for meaningful forms of commemoration was hard enough after the First World War; the Second World War, which saw whole cities disappear in flames, raised the possibility that the limits of representation had been reached. The central contention of this volume - that total war in the twentieth century has a significant but often overlooked metropolitan dimension - is fully addressed, thereby filling a conspicuous gap in the currently available literature.