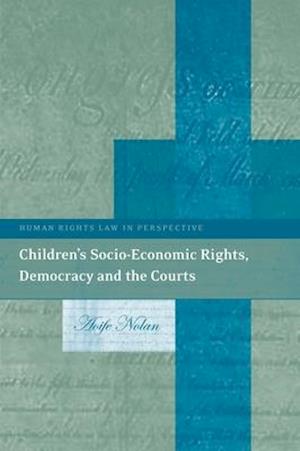 This book is concerned with children's economic and social rights (sometimes referred to simply as children's social rights). Despite increased academic interest in both children's rights and socio-economic rights over the last two decades, children's social and economic rights remain a comparatively neglected area. This is particularly true with regard to the role of the courts in the enforcement of such social rights. Aoife Nolan's book remedies this omission, focussing on the circumstances in which the courts can and should give effect to the social and economic rights of children. The arguments put forward are located within the context of, and develop, long-standing debates in constitutional law, democratic theory and human rights. The claims made by the author are supported and illustrated by concrete examples of judicial enforcement of children's social and economic rights from a variety of jurisdictions. The work is thus rooted in both theory and practice. The author brings together and addresses a wide range of issues that have never previously been considered together in book form. These include children's socio-economic rights; children as citizens and their position in relation to democratic decision-making processes; the implications of children and their rights for democratic and constitutional theory; the role of the courts in ensuring the enforcement of children's rights; and the debates surrounding the litigation and adjudication of social and economic rights. This book thus represents a major original contribution to the existing scholarship in a range of areas including human (and specifically social) rights, legal and political theory and constitutional law.'Children's rights were often thought to be synonymous with economic and social welfare prior to the adoption of the Convention on the Rights of the Child in 1989. Ironically, since that time, remarkably little scholarship has been devoted to the vitally important economic and social rights dimensions of children's rights. Nolan's book singlehandedly remedies that neglect and does so in a sophisticated, nuanced and balanced way. It provides a superb account of the pros and cons of judicial activism in promoting these rights.'Philip Alston, John Norton Pomeroy Professor, NYU Law School'Thus far the burgeoning literature on the judicial enforcement of socio-economic rights has failed to engage in a sustained, systemic manner with this topic from the perspective of children and the complexity of their status as citizens within contemporary democracies. This book fills this gap and makes a major contribution to the literature in the three interrelated areas of the judicial review of socio-economic rights claims, children's rights, and democratic theory. Nolan navigates skilfully through the dense, but rich literature in these areas as well as relevant international and comparative law. In so doing she illuminates both the pitfalls and potential of resorting to courts in a partial response to the multifaceted and deeply entrenched global phenomenon of child poverty.'Professor Sandra Liebenberg, HF Oppenheimer Professor of Human Rights Law, University of Stellenbosch Law Faculty.Winner of the Kevin Boyle Book Prize 2012, awarded by the Irish Association of Law Teachers to a book that is deemed to have made an outstanding contribution to the understanding of law.

Forfattere
Bibliotekernes beskrivelse This book focuses on the circumstances in which the courts can and should give effect to the socio-economic rights of children.