- Sky Pilot to the Glider Pilots of Arnhem 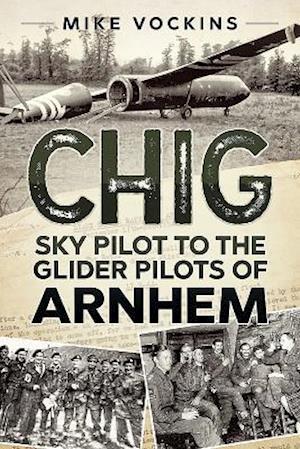 New, hitherto unseen, first-hand accounts of the battle of Arnhem, the heroic Allied military operation known as `Market Garden', become rarer as time passes. "Chig: Sky Pilot to the Glider Pilots of Arnhem" is the story of a choir boy, who became a country parson, who took part in Operation `Market Garden' as Chaplain to the men of the Glider Pilot Regiment. When he left home "Chig" - Rowland Chignell - later the Rev'd Prebendary Chignell, wrote often to his father. Remarkably his father kept those letters written between August 1940 and September 1944 before, post-war, returning them to Chig. Chig died, in 1994, and when his effects were being cleared, among them was a small bundle of papers, containing 84 dog-eared letters Chig had written to his father. With them were eight densely-typed foolscap pages. This extraordinary and unique document, Chig's account of his time in Arnhem with GPR, recounting first-hand conditions which got increasingly hairier before ultimately, under heavy fire, came the withdrawal across the Rhine. The early letters provide almost a social history of war-time rural life in two small parishes in south Shropshire, recounted by a newly-married, newly-appointed country parson. `Dig for Victory', the establishment of a pig club, and keeping of hens, are on the agenda. The difficulty of obtaining petrol and tyres is noted, and yet Chig's cricket club has petrol for the mowers which maintain pitch and outfield to allow to be played against the various Service units stationed nearby - good for morale. A Searchlight Battery's arrival led to Chig becoming their unofficial chaplain. His greater awareness of the vital role played by Service Chaplains led, too, to his volunteering himself as a Chaplain to the to the Forces. Attached initially to the Parachute Regiment's Training Unit - when the use of para-troops in war was still very novel - Chig later was asked to transfer to the GPR. The tenor of the letters change, yet always painting a full and varied picture about his own role (in so far as war-time security allowed) but also about bird-life and the scenery, and about music too - a great love shared with his musical father. Padre Chignell's letters tell a story that demands to be told.