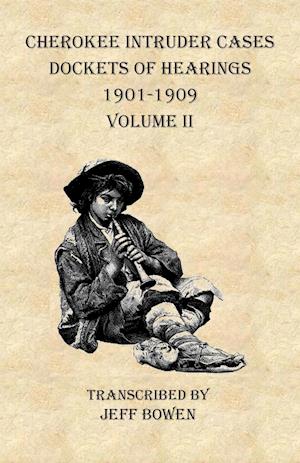 The records in this volume were transcribed from the National Archival film rolls 7RA53 2-3, Cherokee Hearings on Intruder Cases, Dockets of Hearings on Intruder Cases 1901-1909. For definition purposes there are two parties involved with each case within these pages. One is the "intruder" and the other is the "allottee." The term "intruder" refers to an illegal resident in the Cherokee Nation who was living on land that, in the eyes of the Cherokee Commission, did not belong to him/her. The term "allottee" refers to a legal resident of the Cherokee Nation who had been allotted, or given, a parcel of tribal land in the Cherokee Nation through the Dawes Act of 1898-1914. The intruder cases were heard and resolved between 1901 and 1909, and many of them involved contested citizenship claims made by persons claiming Cherokee citizenship based on partial blood. Some of the intruders had made improvements to their parcels, a situation that gave rise to the ambiguous Supreme Court decision in Stevens v. Commissioner in 1906. Other intruders were railroad or mining companies.

The intruders' cases found in this book are intriguing on a number of counts. The cases refer to hundreds of people because of the assortment of individuals referenced on behalf of allottees and intruders, as well as lawyers. In some cases researchers may have to make their own determination as to whether an intruder qualified as a Cherokee citizen. While an ancient family legend may assert that one's ancestors were Indians, the determinations in Stevens left much up in the air. On the one hand, the intruder was considered to be a land owner, based upon the Court's determination as to how he had funded his purchase as an "individual Indian." On the other hand, the intruder does not appear on a Cherokee roll even though his land was protected under papers issued by an Indian Agent. In some cases the Cherokee Nation was able to auction off the intruder's land based on the outcome, "Action, No return of service, no answer filed"; under "Remarks, contest pending, Case dismissed for want of prosecution, dismissed," for a fraction of its true value to the intruder.  There are over 1,300 cases within this 2-book series.