indgår i serie MEDIEVAL AND RENAISSANCE TEXTS AND STUDIES 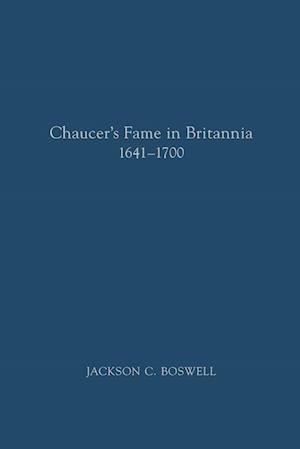 This volume is a compilation of references and allusions to Chaucer from the beginning of the English Civil War to the beginning of the eighteenth century. Chaucer's Fame in Britannia 1641-1700 is a continuation of Jackson Campbell Boswell and Sylvia Wallace Holton's Chaucer's Fame in England: 1475-1640. Both books are meant to supplement the equivalent parts of Caroline Spurgeon's invaluable Five Hundred Years of Chaucer Criticism and Allusion 1357-1900. Together, the two volumes considerably expand previous work in this area and offer a substantial contribution to intellectual history that gives us a much fuller and more profound understanding of Chaucer's influence (and of his uses) during the period covered. Together, these volumes are a massive expansion of Spurgeon's work. The references and allusions are full and, when possible, complete. Chaucer's Fame in England: 1475-1640 has proven to be essential for those interested in the afterlives of Chaucer, and Chaucer's Fame in Britannia 1641-1700 will take a similar place alongside its companion volume.