Chan Rhetoric of Uncertainty in the Blue Cliff Record

- Sharpening a Sword at the Dragon Gate 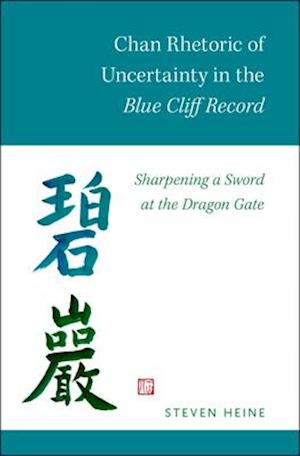 This book provides an in-depth textual and literary analysis of the Blue Cliff Record (Chinese Biyanlu, Japanese Hekiganroku), a seminal Chan/Zen Buddhist collection of commentaries on one hundred gongan/koan cases, considered in light of historical, cultural, and intellectual trends from the Song dynasty (960-1279). Compiled by Yuanwu Keqin in 1128, the Blue Cliff Record is considered a classic of East Asian literaturefor its creative integration of prose and verse as well as hybrid or capping-phrase interpretations of perplexing cases. The collection employs a variety of rhetorical devices culled from both classic and vernacular literary sources and styles and is particularly notable for its use of indirection, allusiveness, irony, paradox, and wordplay, allcharacteristic of the approach of literary or lettered Chan. However, as instrumental and influential as it is considered to be, the Blue Cliff Record has long been shrouded in controversy. The collection is probably best known today for having been destroyed in the 1130s at the dawn of the Southern Song dynasty (1127-1279) by Dahui Zonggao, Yuanwu's main disciple and harshest critic. It was out of circulation for nearly two centuries before being revived and partially reconstructed in the early 1300s. In this book, Steven Heine examines thediverse ideological connections and disconnections behind subsequent commentaries and translations of the Blue Cliff Record, thereby shedding light on the broad range of gongan literature produced in the eleventh to thirteenth centuries and beyond.

Forfattere
Bibliotekernes beskrivelse This book provides an innovative and critical analysis, in light of Song dynasty (960-11279) Chinese cultural and intellectual historical trends, of the Blue Cliff Record, the seminal Chan/Zen Buddhist collection of commentaries on one hundred gongan/koan cases, which has long been celebrated for its intricate and articulate interpretative methods.