- Greek Rhetoric in the Roman Empire 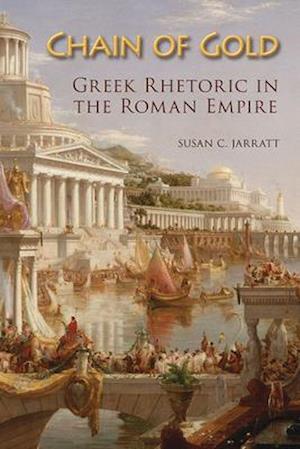 Barred from political engagement and legal advocacy, the second sophists composed and performed epideictic works for audiences across the Mediterranean world during the early centuries of the Common Era. In a wide-ranging study, author Susan C. Jarratt argues that these artfully wrought discourses, formerly considered vacuous entertainments, constitute intricate negotiations with the absolute power of the Roman Empire. Positioning culturally Greek but geographically diverse sophists as colonial subjects, Jarratt offers readings that highlight ancient debates over free speech and figured discourse, revealing the subtly coded commentary on Roman authority and governance embedded in these works.

Through allusions to classical Greek literature, sophists such as Dio Chrysostom, Aelius Aristides, and Philostratus slipped oblique challenges to empire into otherwise innocuous works. Such figures protected their creators from the danger of direct confrontation but nonetheless would have been recognized by elite audiences, Roman and Greek alike, by virtue of their common education. Focusing on such moments, Jarratt presents close readings of city encomia, biography, and texts in hybrid genres from key second sophistic figures, setting each in its geographical context. Although all the authors considered are male, the analyses here bring to light reflections on gender, ethnicity, skin color, language differences, and sexuality, revealing an underrecognized diversity in the rhetorical activity of this period.

While US scholars of ancient rhetoric have focused largely on the pedagogical, Jarratt brings a geopolitical lens to her study of the subject. Her inclusion of fourth-century texts--the Greek novel Ethiopian Story, by Heliodorus, and the political orations of Libanius of Antioch--extends the temporal boundary of the period. She concludes with speculations about the pressures brought to bear on sophistic political subjectivity by the rise of Christianity and with ruminations on a third sophistic in ancient and contemporary eras of empire.