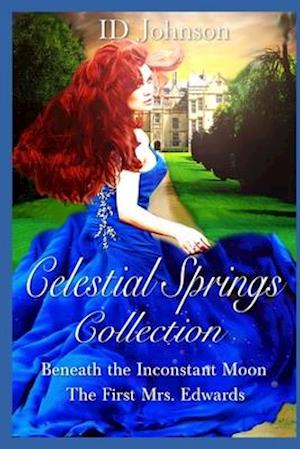 Two women locked away simply for being female....

Welcome to Celestial Springs, where husbands take their wives to seek medical advice for such afflictions as having emotions or thinking independent thoughts. This two book collection will take you back in time to an era where thousands of women were institutionalized for absolutely no reason whatsoever. Through their tragic stories, we can find inspiration, hope, and gratitude for those who've come before us to make a change for the better.

Beneath the Inconstant MoonA secret wedding, a disaster at sea, a woman locked away with only her memories....Ginny Cawley fell in love with Spencer Hayes beneath the light of the silver moon. When he travels to the Caribbean one last time before taking over his father's successful shipping company, his ship disappears, leaving Ginny alone and carrying his child.

Believing Spencer to be dead, Ginny's parents insist she wed again for the sake of her child. There is no proof of Ginny's secret marriage, no way to show the legitimacy of her child. Ginny is left with little choice but to do as her parents wish, hoping Spencer will return as promised, before the moon wanes twice.

As time goes on, Ginny begins to think perhaps she's beginning to lose her mind. Her parents have abandoned her. No one will call her by name. The servants whisper of another ill-fated mistress when they think Ginny isn't listening.

The First Mrs. EdwardsNot all love stories have a happily ever after....All Lydia de Lisle Edwards wants from her new marriage is to love and be loved by the handsome man who rescued her from the embarrassing, and potentially life shattering, ramifications of conceiving a child out of wedlock. However, as Lydia gets to know Isaac Edwards, along with the strange woman who serves as a mother-figure to her new husband, and the terrifying doctor specializing in women's health--particularly hysteria--Lydia begins to realize this marriage might just be her undoing.

An exploration into the struggles of being a woman in the 19th Century, The First Mrs. Edwards examines what it was like to live in a time when women were told they were crazy simply for being women.