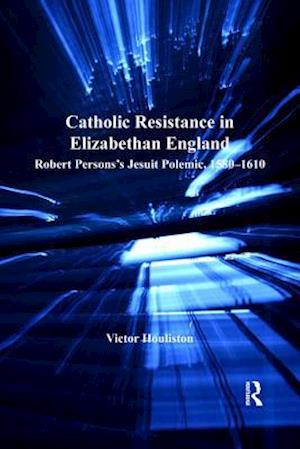 During his lifetime, the Jesuit priest Robert Persons (1546-1610) was arguably the leading figure fighting for the re-establishment of Catholicism in England. Whilst his colleague Edmund Campion may now be better known it was Persons's tireless efforts that kept the Jesuit mission alive during the difficult days of Elizabeth's reign. In this new study, Person's life and phenomenal literary output are analysed and put into the broader context of recent Catholic scholarship. The book bridges the gap between historical studies, on the one hand, and literary studies on the other, by concentrating on Persons's contribution as a writer to the polemical culture of the late sixteenth and early seventeenth centuries. As well as discussing his wider achievements as leader of the English Jesuits - founding three seminaries for English priests, corresponding regularly with Catholic activists in England, writing over thirty books, holding the post of rector of the English College in Rome, and being a trusted consultant to the papacy on English affairs - this study looks in detail at what is arguably his greatest legacy, The First Booke of the Christian Exercise (more commonly known as the Book of Resolution). That book, first published in 1582, was to prove the cornerstone of Persons's missionary effort, and a popular work of Catholic devotion, running to several editions over the coming years. Although Persons was ultimately unsuccessful in his ambition to return England to the Catholic fold, the story of his life and works reveals much about the ecclesiastical struggle that gripped early modern Europe. By providing a thorough and up-to-date reassessment of Persons this study not only makes a significant contribution to our understanding of the polemical context of post-Reformation Catholicism, but also of the Jesuit notion of the 'apostolate of writing'. This book is published in conjunction with the Jesuit Historical Institute series 'Bibliotheca Instituti Historici