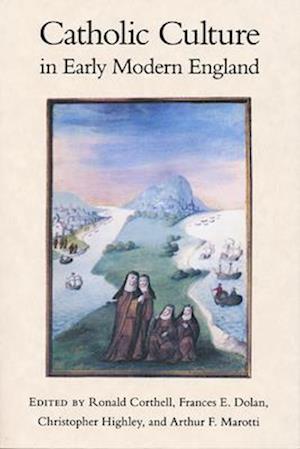 This collection of essays explores the survival of Catholic culture in sixteenth- and seventeenth-century England--a time of Protestant domination and sometimes persecution. Contributors examine not only devotional, political, autobiographical, and other written texts, but also material objects such as church vestments, architecture, and symbolic spaces. Among the topics discussed in this volume are the influence of Latin culture on Catholic women, Marian devotion, the activities of Catholics in continental seminaries and convents, the international context of English Catholicism, and the influential role of women as maintainers of Catholic culture in a hostile religious and political environment. Catholic Culture in Early Modern England makes an important contribution to the ongoing project of historians and literary scholars to rewrite the cultural history of post-Reformation English Catholicism. This collection contains cutting-edge research on a topic that has, until recently, been shockingly unrecognized and under-studied in the academic mainstream. This is a timely publication and one bound to prove a key point of reference in the future. --Alison Shell, University of Durham In recent years, English Catholicism has emerged as one of the most richly provocative and productive veins of scholarship and critical inquiry in Early Modern studies. Catholic Culture in Early Modern England shows why this is so. The editors have assembled a well-balanced and wide-ranging collection of essays that impressively demonstrates how the question of what counts as English Catholic experience opens up fresh perspectives on the nature and scope of confessional and political identity and, more broadly, on the meaning of culture itself in relation to the diaspora that left its mark not only on early modern religious and social space but also on gender roles, aesthetic practice, and the uses of symbolic forms.--Lowell Gallagher, UCLA Catholic Culture in Early Modern England is a well-considered contribution to the ongoing re-evaluation of post-Reformation English Catholicism and early modern history. The judicious introduction appropriately locates the essays in the wider context of contemporary scholarship and places them in relation to each other. The essays themselves shed light on familiar figures (Queen Henrietta Maria, William Alabaster, John Gerard, William Allen, and Robert Persons) as well as on unfamiliar ones (Helena Wintour and Barbara Constable). Some illuminate Catholic institutions, cultural practices, and individual works. All in all, this is a timely, thoughtful, and valuable collection.--Robert S. Miola, Gerard Manley Hopkins Professor, Loyola College English Catholics lived among their Protestant neighbors, but they had cultural practices that identified them as Catholics, gave them a sense of community, and quietly asserted their values. These articles do a fine job of opening up the mental and physical worlds they created and represented in their gardens, houses, needlework, conversion narratives and high literature. Tied to international Catholicism, English Catholics lived within a sophisticated culture made more complex by secrecy.--Norman Jones, Utah State University