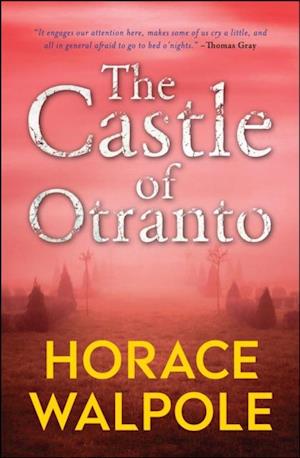 The Castle of Otranto is a 1764 novel by Horace Walpole, which merged medievalism and terror in a style that has endured ever since. It is generally regarded as the first gothic novel, and it was indeed the first novel to describe itself by that term. The aesthetic of the book has shaped modern-day gothic books, films, art, music and the Goth subculture. Castle is thus generally credited with initiating the Gothic literary genre, one that would become extremely popular in the later 18th Century and early 19th Century. The son of Manfred, Prince of Otranto, is mysteriously killed on his wedding day by a huge helmet. The event leads to a fast-paced story of jealous passion, intrigue, murder and supernatural phenomena unfolding in an atmosphere of thunderclaps, moonlight and dark castle walls-mirroring the inner turmoils of the characters themselves. Horace Walpole's tale received immediate success when it first appeared.