Carly On Her Knees 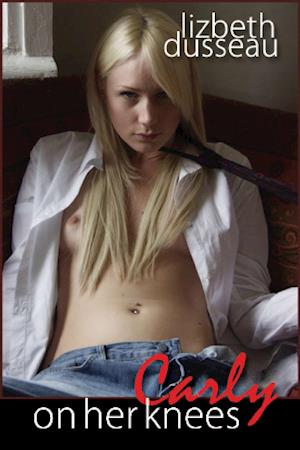 Carly has a carefree life, living in Paris on her family's money. When she stumbles into reporter Tyler McBride as she's exiting the American Embassy, there is an instantaneous attraction that lands the pair in bed for a torrid romance. After three days, Tyler is off to the Middle East where he could remain for months. When Carly does not hear from him, she assumes the affair is over and impulsively takes on a clandestine assignment for her former lover, Dana, who is an operative with the State Dept. Dana knows of Carly's submissive desires. In fact, she's caned her on several occasions with very erotic results. Now, she sends the despondent girl into a nightmarish affair with a wealthy industrialist, Byron Haverleigh, who may be selling state secrets to foreign countries. Haverleigh is also an accomplished sexual master, who wants a groveling pet to play with while in Paris. Carly will become his latest victim and a mole for Dana. Forced to her knees and made to crawl before him and his friends at a Paris fetish club, Carly finds herself thriving on the thrills of pain, humiliation and the rough sex Haverleigh demands of her. The deeper she slides into her submissive role the more she hungers for the edgy extremes. But when she overhears secret information in Haverleigh's private conversations and returns home to a ransacked apartment, she panics. A surprise call from Tyler, sends her fleeing to Istanbul where their scorching romance picks up where it left off, culminating in a whirlwind wedding. Little does she knows that she's on the brink of disaster and when her entire life is ripped apart, she lands in the US, facing yet another dominant man who will take her submissive desires further than she could every dream.