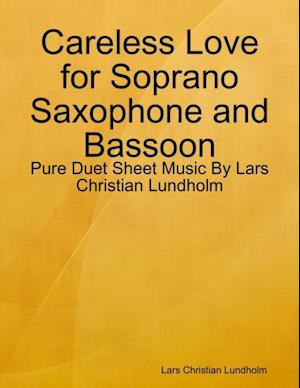 This traditional and popular folk song of unknown origins has been performed and recorded by among others Elvis Presley, Bob Dylan, Harry Connick Jr and Louis Armstrong. At the start of the 20th century it was the best known piece in the repertory of the Buddy Bolden band in New Orleans, Louisiana. In popular culture it has been featured many times in film and TV and it still to this day remains part of the standard jazz and blues repertoire. This can be used as lead sheet as it includes chords for easy accompanimentDuet Sheet Music for Soprano Saxophone accompanied by Bassoon arranged by Lars Christian Lundholm. Careless Love is also known by alternative title: a Bunch of Thyme, Worries on my mind, Crazy Arms. - Instrumentation: Soprano Saxophone and Bassoon- Level: Easy- Score Type: Solo Score- Tempo: Medium- Genre: Blues- Composer: Anonymous- Year Composed: Unknown Year- Pages (approximate): 4