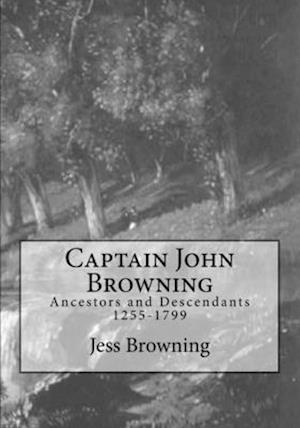 This book was converted from color, of a book of the same name, to grey tones April 7, 2016. Captain John Browning was born about 1588 in England, and died about 1662. He allegedly married about the year 1614. Children were George and William in addition to accounts of other children including a Thomas. Sometime around the year 1621, he and his family left England for Virginia where his descendants supposedly established a line of descendants that could be found throughout America. His ancestors go back hundreds of years, primarily in the counties of Gloucestershire and Dorset in England. The interesting thing about him is that there is more speculation and less known about him than of many people in history. This Second Edition is much enlarged and its index contains full names of thousands persons other than Browning as well as subject names. The endnotes reference many of the sources. The Gloucestershire Berkeley family had a large influence on Browning's both in England and Virginia and this work should be viewed as a theory of family history or historical fiction (sometimes hysterical fiction). It is sad that thousands of genealogical records are based on bad information. It is hoped that any citations of this work be done with the proper caveats. Since so little is known about Captain John Browning's private life, a fictional account of his activities is presented in the book "Captain John: From England to Virginia." There is also a fictional account of the private lives of his descendants in the books "Francis', "Caleb," "William T.," and "Jeb."