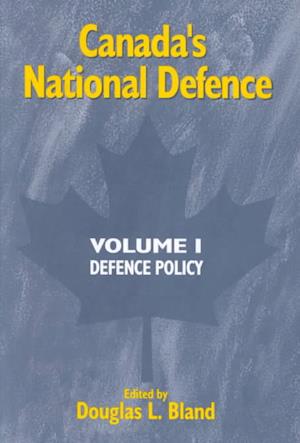 Canadian governments have not issued many policy statements on national defence since 1945. Most of those presented to Parliament were simple pronouncements of the status quo, especially after the early 1950s. Occasionally, however, ministers attempted to take defence policy in new, and sometimes radical, directions. This volume of Canada's National Defence critically examines five such sentinel policy papers: Defence 1947; White Paper on Defence, 1964; Defence in the 70s; Challenge and Commitment: A Defence Policy for Canadians; and Defence 1994. Douglas Bland stresses the importance of seeing the papers as declarations of intent made in the midst of ongoing policy and administration. Each white paper and defence policy, generally, had to contend with the attitudes and opinions of senior military and public service leaders who had, not surprisingly, their own views on policy. Ministers who challenged these views usually had to force policies forward against the opposition of soldiers and officials. In such circumstances, the policies seldom retain their original shape and intent once the minister departs. The history of policies declared in white papers, therefore, provides a glimpse at the realities of civil-military relations in Canada. The questions are, whose policy survives and why?