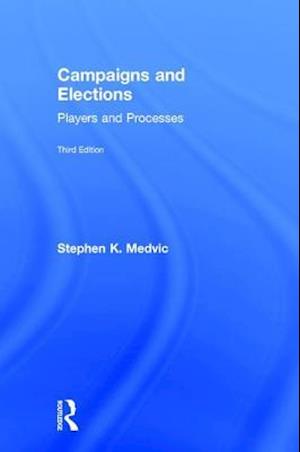 Stephen Medvic's Campaigns and Elections is a comprehensive yet compact core text that addresses two distinct but related aspects of American electoral democracy-both the processes that constitute campaigns and elections and the players who are involved. In addition to balanced coverage of process and actors, it also gives equal billing to both campaigns and elections, and covers contests for legislative and executive positions at the national and state and local levels, including issue-oriented campaigns of note. The book opens by providing students with the conceptual distinctions between what happens in an election and the campaigning that precedes it. Significant attention is devoted to setting up the context for these campaigns and elections by covering the rules of the game in the American electoral system as well as aspects of election administration and the funding of elections. Then the book systematically covers the actors at every level-candidates and their organizations, parties, interest groups, the media, and voters-and the macro level aspects of campaigns such as campaign strategy and determinants of election outcomes. The book concludes with a big picture assessment of campaign ethics and implications of the "permanent campaign". New to the Third EditionFully updated through the 2016 elections.Questions the "party decides" theory of the nomination process in light of the Trump Republican candidacy.Covers campaign finance laws and practice emanating from both Citizens United and McCutcheon.Critically examines restrictive voting laws in place for the first time in the 2016 presidential election.Looks at new automatic voter registration as well as registration removals.Expands coverage of media effects on campaigns at every stage, including social media.Draws upon recent research on new campaign technologies and of the science of campaigning.