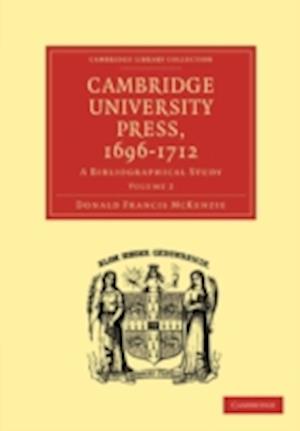 Donald Francis McKenzie (1931-1999) was one of the foremost bibliographers of the twentieth century, and his contributions to the history of the book continue to exert great influence on the field. Early in his career, he made a detailed study of the archives of Cambridge University Press, focusing on the period 1696-1712. In the course of his research, McKenzie discovered quite different working practices and patterns from what had previously been assumed, and this two-volume book, published in 1966, revolutionized the study of printing history. Volume 1 outlines the Press' operation during this period: how it was organized, what buildings it built and occupied, who worked for it, what the state of its finances were and how it went about publishing and printing its own books as well as printing for others. Appendices list the books printed between 1696 and 1712 and the type and ornaments used.