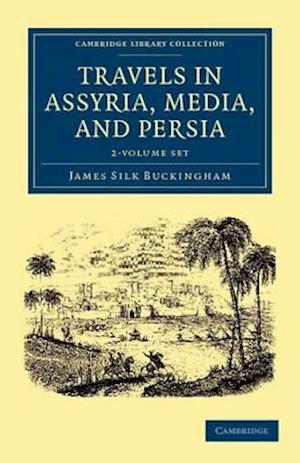 Cornish-born writer, traveller and controversialist James Silk Buckingham (1786-1855) spent much of his early life as a sailor in the Atlantic and the Mediterranean and went on to publish accounts of his extensive travels to India, Palestine and Persia. His criticisms of the East India Company and the Bengal government led to his expulsion from India in 1823. In the 1830s he became a Member of Parliament and campaigned for social reforms. He founded several journals, including the periodical The Athenaeum. This illustrated two-volume work, published in 1829 and reprinted here from its second edition of 1830, recounts Buckingham's journey through Assyria and Persia en route for India, giving vivid descriptions of its ancient sites and his views on the modern inhabitants of the region. Volume 1 covers the journey from Baghdad to Shiraz, and Volume 2 from Shiraz to the Persian Gulf port of Muscat in Modern Oman.

Forfattere
Bibliotekernes beskrivelse Cornish-born writer, traveller and controversialist James Silk Buckingham (1786-1855) published this two-volume work in 1829; the 1830 reprint is reissued here. It traces his journey from Baghdad to the Persian Gulf, from where he sailed for Bombay, and describes both the ancient sites and the modern inhabitants. 25 Plates, black and white; 1 Maps Contains 2 Paperback / softbacks