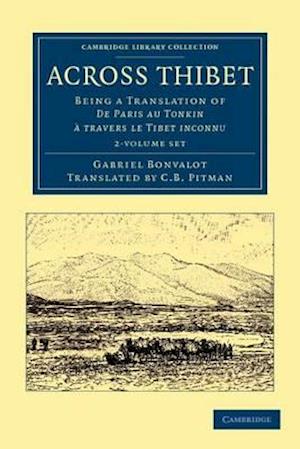 The French explorer, author and legislator Gabriel Bonvalot (1853-1933) travelled widely in Central Asia in the 1880s. This two-volume English translation by C. B. Pitman of the 1889-90 French original was published in 1891. It describes Bonvalot's expedition across Europe and Asia to French Indochina. Accompanied by Prince Henri d'Orleans whose father, the Duc of Chartres, financed the expedition, Bonvalot left Paris in July 1889. The expedition travelled across Russia and south through Siberia to Tibet, encountering considerable obstacles, including temperatures reaching 40 degrees below zero and altitude sickness affecting many of the party. They obtained formal permission to enter Tibet despite the Lhasa government's policy of turning away foreigners, and Bonvalot was fascinated with the polyandry and polygamy practised by the Tibetans. The expedition continued to China's Yunnan province and Tonkin in northern Vietnam, reaching Hanoi in 1890; they returned to France by sea.