- Conferences Held in Connection with the Special Loan Collection of Scientific Apparatus, 1876 2 Volu 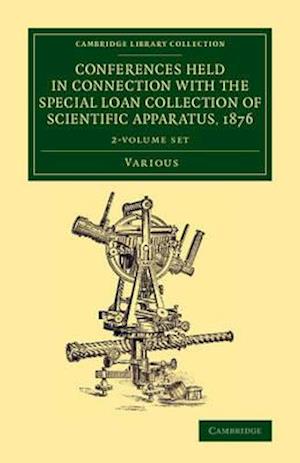 In 1876 the South Kensington Museum held a major international exhibition of scientific instruments and equipment, both historical and contemporary. Many of the items eventually formed the basis of collections now held at London's Science Museum. In May 1876, organisers arranged a series of conferences at which leading British and European scientists explained and demonstrated some of the items on display. The purpose was to emphasise the exhibition's goal not merely to preserve archaic treasures (such as Galileo's telescopes or Janssen's microscope) but to juxtapose them with current technology and so inspire future scientific developments. Volume 1 covers physics, astronomy and mechanics, while Volume 2 is devoted to chemistry, biology, and the earth sciences. Many of the distinguished contributors, including William Thomson, James Clerk-Maxwell, John Tyndall, Thomas Stevenson and Joseph Dalton Hooker, appear elsewhere in the Cambridge Library Collection, which also includes the full catalogue of the exhibition itself.

Forfattere
Bibliotekernes beskrivelse In 1876 the South Kensington Museum held a major international exhibition of scientific instruments and equipment, both historical and contemporary. A series of conferences in May allowed many distinguished scientists to discuss the items on display. This two-volume collection of their reports covers physics, mechanics, chemistry, biology, and earth sciences. 40 Line drawings, unspecified Contains 2 Paperback / softbacks