The History of India, as Told by its Own Historians 8 Volume Set 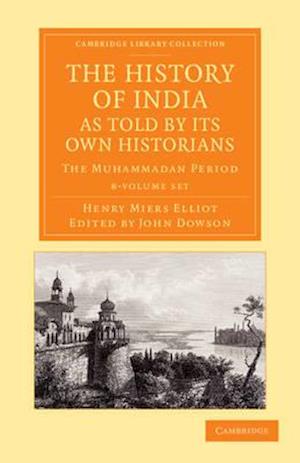 This extensive eight-volume work was first published between 1867 and 1877 by the linguist John Dowson (1820-81) from the manuscripts of the colonial administrator and scholar Sir Henry Miers Elliot (1808-53). Before his death, hoping to bolster British colonial ideology, Elliot had intended to evaluate scores of Arabic and Persian historians of India, believing that his translations would demonstrate the violence of the Muslim rulers and 'make our native subjects more sensible of the immense advantages accruing to them under the mildness and the equity of our rule'. The collection is therefore not only valuable for its translation into English of many important extracts of sources from the ninth century to the nineteenth, but it also serves as a fascinating example of the use of historiography as a colonial tool.

Forfattere
Bibliotekernes beskrivelse Published between 1867 and 1877, this is an extensive eight-volume translation and study of the histories of Muslim India. The work is not only valuable for its translation of important extracts, but also serves as a fascinating example of the use of historiography as a colonial tool. 2 Plates, black and white Contains 8 Paperback / softbacks