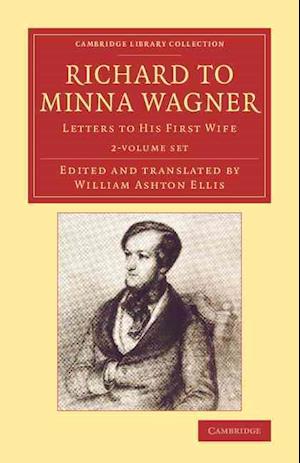 The German actress Minna Planer (1809-66) was Wagner's first wife. Though it lasted until her death, their marriage, never an easy one, was punctuated by long periods of separation, and during its early years Minna was the main breadwinner. William Ashton Ellis (1852-1919) abandoned his medical career to devote himself to his Wagner studies. Best known for his translations of Wagner's prose works, he published in 1909 this collection of letters from the composer, translated from the originals in Baron Hans von Wolzogen's Richard Wagner an Minna Wagner (1908). Concerned predominantly with domestic and business affairs, many of them complaining at Minna's lack of support, the letters offer an intriguing and intimate view of this larger-than-life composer. Volume 1 covers the period 1842-58, during which the couple lived in Dresden and Zurich. Volume 2 spans the years 1858-63, during which the couple separated but did not divorce.

Forfattere
Bibliotekernes beskrivelse German actress Minna Planer (1809-66) was Wagner's first wife. Their marriage, never an easy one, lasted until her death. This fascinating collection of letters, translated by Wagner enthusiast William Ashton Ellis (1852-1919), appeared in 1909. It offers an intriguing and intimate view of this larger-than-life composer. Contains 2 Paperback / softbacks