- Undertaken by Order of the Imperial Government, in the Years 1857, 1858, and 1859 (Narrative of the Circumnavigation of the Globe by the Austrian Frigate Novara 3 Volume Set: Undertak) 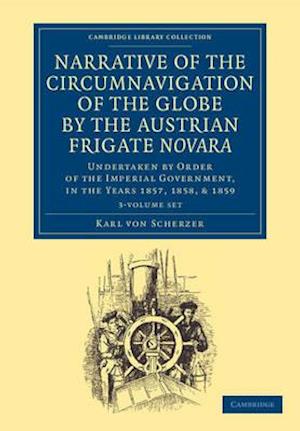 Joined by seven eminent natural scientists, including Karl von Scherzer (1821-1903), the Austrian naval expedition of 1857-9 was remarkable for its globe-spanning scale. During the course of the voyage, the naturalists collected an abundance of samples which contributed to several scientific discoveries, including the isolation of cocaine in its pure form. Some of the investigations also revolutionised knowledge in such fields as geology, oceanography, hydrography and geomagnetism, and are still being studied by modern-day researchers. Prepared by Scherzer and first published in English in 1861-3, this is a compelling three-volume account of the mission, remaining relevant to scholars interested in naval exploration and the history of science. The volumes include notes on the populations, flora and fauna encountered during the voyage from Europe via India to Australia, and thence via South and Central America on the return leg of the journey.

Forfattere
Bibliotekernes beskrivelse Published in 1861-3, this three-volume work, compiled by Karl von Scherzer (1821-1903), documents the first globe-spanning scientific expedition of the Austrian navy in 1857-9. The investigations conducted during this voyage laid the foundations for future research in various fields and are still being studied by modern-day scientists. 17 Maps; 68 Line drawings, unspecified Contains 3 Paperback / softbacks