Directions for Sailing to and from the East Indies, China, New Holland, Cape of Good Hope, and the Interjacent Ports

- Compiled Chiefly from Original Journals at the East India House (Directions for Sailing to and from the East Indies, China, New Holland, Cape of Good Hope, and the I) 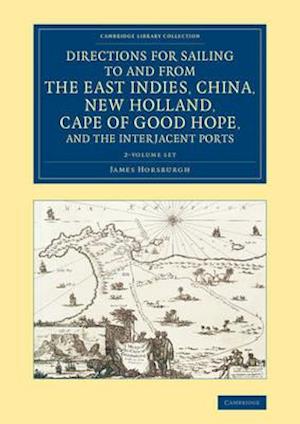 As first mate aboard an East India Company vessel, James Horsburgh (1762-1836) was shipwrecked in the Indian Ocean in 1786 after faulty charts steered the ship onto a reef. Thereafter he devoted himself to the production of accurate charts of the eastern seas, keeping meticulous notes on extensive voyages, and carefully scrutinising the accounts and journals of other mariners. For his efforts, Horsburgh was elected to the Royal Society in 1806, and appointed hydrographer to the East India Company in 1810. The present work, reissued here in its two-volume first edition of 1809-11, remained a standard navigational reference for half a century (it was aboard the Beagle during Darwin's famous voyage). For given locations, it provides a description of the area and landmarks, and lists prevailing winds and currents, as well as any navigational hazards. Volume 1 covers mostly the sailing route to India, via Brazil and the Cape of Good Hope. Volume 2 includes the routes between India and China.

Forfattere
Bibliotekernes beskrivelse After poor navigation led to his ship being wrecked in the Indian Ocean in 1786, James Horsburgh (1762-1836) devoted himself to the production of accurate charts of the eastern seas. This two-volume work, first published in 1809-11, became the standard reference for navigators for half a century. Contains 2 Paperback / softbacks