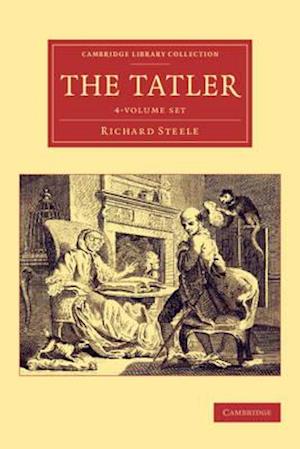 The appearance of the first issue of The Tatler in 1709 is usually regarded as the beginning of periodical publication in England. Its founder, Richard Steele (1672-1729), intended 'a paper, which should observe upon the manners of the pleasurable, as well as the busy part of mankind ... by way of a letter of intelligence, consisting of such parts as might gratify the curiosity of persons of all conditions, and of each sex'. The 'datelines' of the reports, on news, literature, and plain gossip, were from the most famous coffee houses of early Georgian London, and the contributors included Jonathan Swift and Joseph Addison. The magazine, appearing two or three times a week, was published for only two years, from April 1709 to January 1711: shortly afterwards, Steele and Addison co-founded The Spectator. This four-volume edition was issued in 1797 by a consortium of publishers, including John Nichols.

Forfattere
Bibliotekernes beskrivelse The Tatler (published 1709-11) is usually regarded as the first periodical publication in England. Its founder, Richard Steele (1672-1729), intended a paper which would report on news and gossip but not politics. This four-volume edition was first issued in 1797 by a consortium of publishers, including John Nichols. Contains 4 Paperback / softbacks