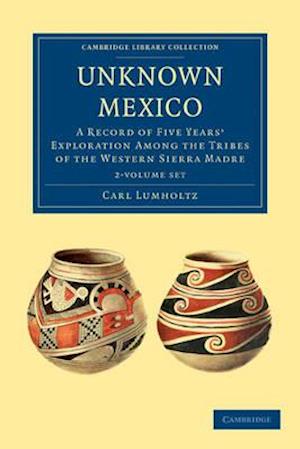 Carl Lumholtz (1851-1922) was a Norwegian ethnographer and explorer who, soon after publishing an influential study of Australian Aborigines, spent five years researching native peoples in Mexico. This two-volume work, published in 1903, describes his expeditions to remote parts of north-west Mexico, inspired by reports about indigenous peoples who lived in cliff dwellings along mountainsides. While in the US in 1890 on a lecture tour, Lumholtz was able to raise sufficient funds for the expedition. He arrived in Mexico City that summer, and after meeting the president, Porfirio Diaz, he set off with a team of scientists for the Sierra Madre del Norte mountains in the north-west of Mexico, to find the cave-dwelling Tarahumare Indians. Volume 1 focuses on the life and beliefs of the Tarahumare, as well as the natural history of this little-explored region. Volume 2 describes the society and religious practices of the neighbouring Huichols people.

Forfattere
Bibliotekernes beskrivelse In 1903 the Norwegian ethnographer and explorer Carl Lumholtz (1851-1922) published this two-volume account of the five years he spent living among indigenous tribes in the remote mountains of north-west Mexico. He describes the daily life, social organisation and religious beliefs of the Tarahumare and Huichols peoples. 15 Plates, color; 45 Plates, black and white; 4 Maps; 374 Halftones, unspecified Contains 2 Paperback / softbacks