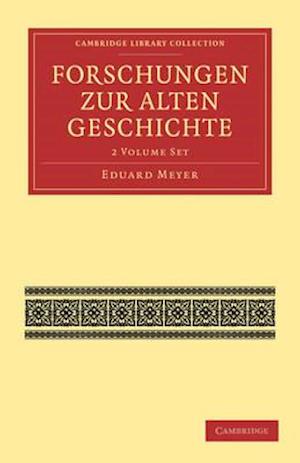 The German historian Eduard Meyer's two-volume work on ancient history was first published in 1892 1899. More than any other historian of his time Meyer (1855 1930) insisted on considering world history as a whole, even in the classical period, rather than adopting the traditional subdivision into Roman, Greek and Oriental categories. He was also convinced that a combination of philological and historical approaches was needed for an accurate interpretation of history. In Volume 1 Meyer gives a thorough account of the Pelasgian people in places such as Attica, the island of Lemnos and Thessaly, paying particular attention to the chronology of the work of the Greek historian Herodotus. Volume 2 is devoted almost entirely to the Greek history of the fifth century BCE, focusing on Attica, Cimon and Thucydides, with additional discussion of the governments of the Persian and Spartan kings."

Forfattere
Bibliotekernes beskrivelse The German historian Eduard Meyer's two-volume work on ancient history up to the fifth century BCE was first published in 1892-1899. Volume 1 focuses on the Pelasgian people, the Ionians and Herodotus, while Volume 2 is devoted to the fifth century BCE, focusing on Attica, Cimon and Thucydides. Contains 2 Paperback / softbacks