Woman and Her Master - 2-Volume Set

- Woman and her Master 2 Volume Set 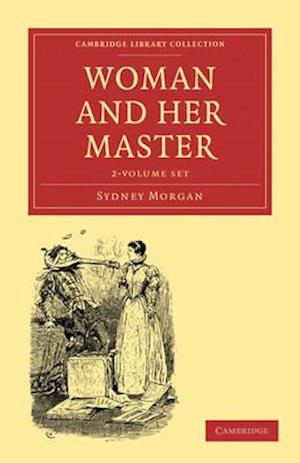 Sydney, Lady Morgan (?1783-1859) is best remembered as an Irish novelist whose highly successful historical romances often dealt with sexual, religious and racial discrimination. One of her last works, Woman and her Master, published in 1840, examines the role of women in history. Morgan originally planned to write four volumes, but owing to her ill health only the first two, focusing on the Old Testament and classical civilization, were completed. Morgan proposes the view that women were really the dominant sex that shaped human society. She criticizes the legal discrimination against women that persists even in an age when superiority is no longer defined by sheer physical strength, and writes vividly and passionately about the indignities to which women were and are subjected by men. For more information on this author, see http: //orlando.cambridge.org/public/svPeople?person_id=morgsy

Forfattere
Bibliotekernes beskrivelse Sydney, Lady Morgan (?1783-1859) was a successful Irish novelist whose work often focused on discrimination. Woman and her Master, published in 1840, is a historical survey of the position of women in society. Morgan strongly criticizes legal discrimination against women, and emphasizes women's influential role in world history. Contains 2 Paperback / softbacks