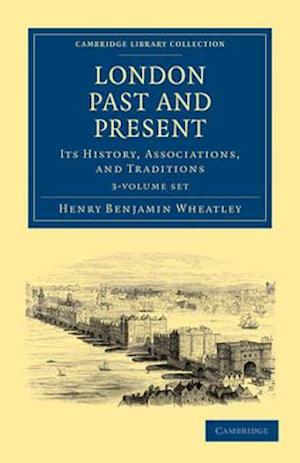 The bibliographer and editor Henry Benjamin Wheatley (1838-1917) produced a prodigious number of books and articles on a wide range of topics, literary, historical, bibliographical and artistic. He worked for many years for the Royal Society and the Royal Society of Arts, was a founder member of the Library Association, and produced an edition of Pepys' diary which was not superseded until the 1970s. London Past and Present was published in 1891, expanding and updating Peter Cunningham's Handbook of London of 1849. It is a three-volume topographical and historical dictionary of London places and landmarks, and the people who lived there. Based on historical, literary and architectural sources, it reveals many fascinating details as it traces the development of the metropolis from medieval times to the time of writing. Nineteenth-century London was experiencing rapid change, and this work preserves the memory of many buildings now lost.

Forfattere
Bibliotekernes beskrivelse Published in 1891 in three volumes, this is a fascinating topographical dictionary covering a thousand years of history. Many of London's historic streets and buildings were being redeveloped during the rapid urban expansion of the Victorian period, and Wheatley mines historical, literary and architectural sources to preserve their memory. Contains 3 Paperback / softbacks