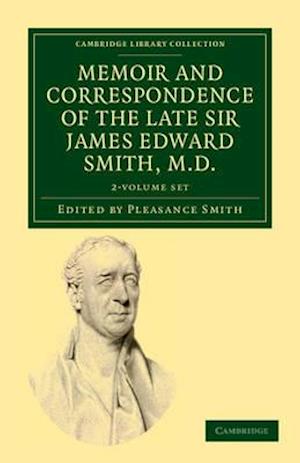 Originally published in 1832, this two-volume life of Sir James Edward Smith (1759-1828) was posthumously compiled by his wife, Pleasance (1773-1877). Smith trained originally as a doctor, but his independent wealth enabled him to pursue botany. Hugely influenced by the work of Linnaeus, he benefited greatly from the purchase of the latter's library and herbarium in 1783, upon the advice of his friend, Sir Joseph Banks. He was highly regarded throughout Europe as a botanist, and in 1788 founded the Linnean Society. He published various botanical works, of which the most important was The English Flora (1824-8), and assisted in the publication of many more. His wife recounts his character as well as his achievements, using both narrative and 'various familiar and domestic letters' to do so.

Forfattere
Bibliotekernes beskrivelse Sir James Edward Smith (1759-1828) was highly regarded throughout Europe as a botanist, and in 1788 founded the Linnean Society. This two-volume memoir and selection of letters was edited by his wife and published in 1832. Contains 2 Paperback / softbacks