Calendar of the Correspondence of Richard Baxter: Volume I: 1638-1660

indgår i serie Calendar of the Correspondence of Richard Baxter 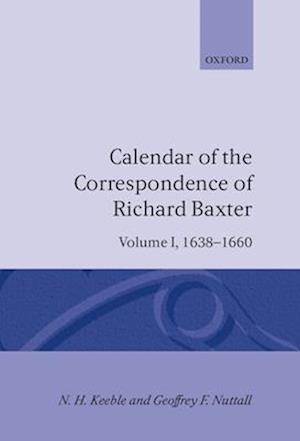 The correspondence of the Puritan divine Richard Baxter (1615-1691) is an unusually rich source of evidence for seventeenth-century history, in particular for the period's involved ecclesiastical history and its intellectual, cultural, and bibliographical tastes, as well as for Baxter himself. The 1250 or so extant letters, spanning 1638-1696 and varying in length from brief notes to mini-treatises, are exchanged with a very wide range of correspondents and touch ona great variety of topics, from pastoral advice and theological controversy to current political affairs and legislation. The great majority of the letters, often undated and unattributed, have never been published.The present Calendar makes the substance of the correspondence fully available for the first time. The chronological sequence of the letters is established, correspondents are identified with full biographical information, and the occasional and essential subject of every letter is indicated. In the great majority of cases detailed summaries are given, often with extensive quotation verbatim; and all persons, books, and other matters of fact mentioned in the letters are glossed andannotated. There are also indexes of persons, of places, and of Baxter's works.In the course of annotation and contextualization, the Calendar frequently corrects or expands standard reference works, while the letters themselves often supply previously unknown information about the period.

Forfattere
Bibliotekernes beskrivelse A scholarly edition of letters by Richard Baxter. The edition presents an authoritative text, together with an introduction, commentary notes, and scholarly apparatus. frontispiece portrait