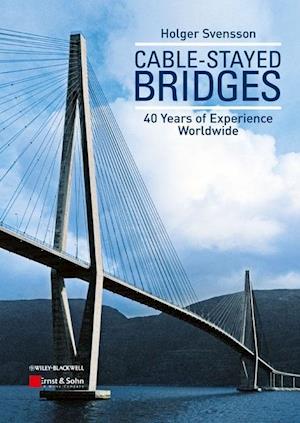 The need for large-scale bridges is constantly growing due to the enormous infrastructure projects around the world. This book describes the fundamentals of design analysis, fabrication and construction. The chapters on cables and erection are a major focus. With built examples.

Forfattere
Bibliotekernes beskrivelse The need for large-scale bridges is constantly growing due to the enormous infrastructure development around the world. Since the 1970s many of them have been cable-stayed bridges. In 1975 the largest span length was 404 m, in 1995 it increased to 856 m, and today it is 1104 m. Thus the economically efficient range of cable-stayed bridges is tending to move towards even larger spans, and cable-stayed bridges are increasingly the focus of interest worldwide. This book describes the fundamentals of design analysis, fabrication and construction, in which the author refers to 250 built examples to illustrate all aspects. International or national codes and technical regulations are referred to only as examples, such as bridges that were designed to German DIN, Eurocode, AASHTO, British Standards. The chapters on cables and erection are a major focus of this work as they represent the most important difference from other types of bridges. The examples were chosen from the bridges in which the author was personally involved, or where the consulting engineers, Leonhardt, Andra and Partners (LAP), participated significantly.Other bridges are included for their special structural characteristics or their record span lengths. The most important design engineers are also presented.