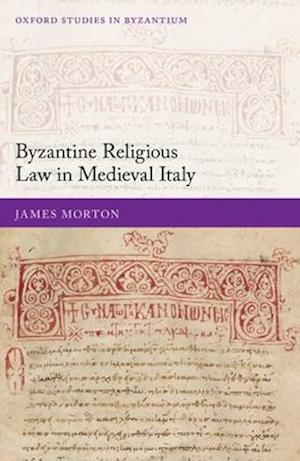 Southern Italy was conquered by the Norman Hauteville dynasty in the late eleventh century after over five hundred years of continuous Byzantine rule. At a stroke, the region's Greek Christian inhabitants were cut off from their Orthodox compatriots in Byzantium and became subject to the spiritual and legal jurisdiction of the Roman Catholic popes. Nonetheless, they continued to follow the religious laws of the Byzantine church; out of thirty-six survivingmanuscripts of Byzantine canon law produced between the tenth and fourteenth centuries, the majority date to the centuries after the Norman conquest.Byzantine Religious Law in Medieval Italy is a historical study of these manuscripts, exploring how and why the Greek Christians of medieval southern Italy persisted in using them so long after the end of Byzantine rule. The first part of the book provides an overview of the source material and the history of Italo-Greek Christianity. The second part examines the development of Italo-Greek canon law manuscripts from the last century of Byzantine rule to the late twelfth century,arguing that the Normans' opposition to papal authority created a laissez faire atmosphere in which Greek Christians could continue to follow Byzantine religious law unchallenged. Finally, the third part analyses the papacy's successful efforts to assert its jurisdiction over southern Italy in the later MiddleAges. While this brought about the end of Byzantine canon law as an effective legal system in the region, the Italo-Greeks still drew on their legal heritage to explain and justify their distinctive religious rites to their Latin neighbours.

Forfattere
Bibliotekernes beskrivelse Byzantine Religious Law in Medieval Italy is a historical study of manuscripts containing Byzantine canon law produced after the Norman conquest of southern Italy, exploring how and why the Greek Christians of the region persisted in using them so long after the end of Byzantine rule. 5 maps, 15 black-and-white illustrations