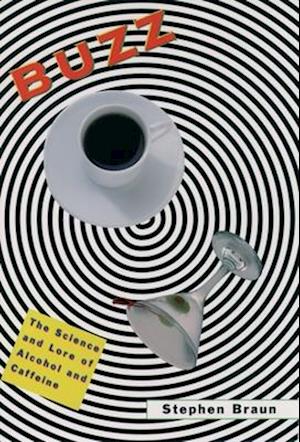 Alcohol and caffeine are deeply woven into the fabric of life for most of the world's population, as close and as comfortable as a cup of coffee or a can of beer. Yet for most people they remain as mysterious and unpredictable as the spirits they were once thought to be. Now, in Buzz, Stephen Braun takes us on a myth-shattering tour of these two popular substances, one that blends fascinating science with colorful lore, and that includes cameo appearances byShakespeare and Balzac, Buddhist monks and Arabian goat herders, even Mikhail Gorbachev and David Letterman (who once quipped, `If it weren't for the coffee, I'd have no identifiable personality whatsoever').Much of what Braun reveals directly contradicts conventional wisdom about alcohol and caffeine. Braun shows, for instance, that alcohol is not simply a depressant as popularly believed, but is instead `a pharmacy in a bottle' - mimicking the action of drugs such as cocaine, amphetamine, valium, and opium. At low doses, it increases electrical activity in the same brain systems affected by stimulants, influences the same circuits targeted by valium, and causes the release of morphine-likecompounds known as endorphins - all at the same time. This explains why alcohol can produce a range of reactions, from boisterous euphoria to dark, brooding hopelessness. Braun also shatters the myth that alcohol kills brain cells, reveals why wood alcohol or methanol causes blindness, and explains thebiological reason behind the one-drink-per-hour sobriety rule (that's how long it takes the liver, working full tilt, to disable the 200 quintillion ethanol molecules found in a typical drink). The author then turns to caffeine and shows it to be no less remarkable. We discover that more than 100 plant species produce caffeine molecules in their seeds, leaves, or bark, a truly amazing distribution throughout nature (nicotine, in comparison, is found only in tobacco; opium only in the poppy).It's not surprising then that caffeine is far and away the most widely used mind altering substance on the planet, found in tea, coffee, cocoa, chocolate, soft drinks, and more than 2,000 non-prescription drugs. (Tea is the most popular drink on earth, with coffee a close second.) Braun also exploresthe role of caffeine in creativity: Johann Sebastian Bach, for one, loved coffee so much he wrote a Coffee Cantata (as Braun notes, no music captures the caffeinated experience better than one of Bach's frenetic fugues); Balzac would work for 12 hours non-stop, drinking coffee all the while; and Kant, Rousseau, and Voltaire all loved coffee. And throughout the book, Braun takes us on many engaging factual sidetrips - we learn, for instance, that Theodore Roosevelt coined the phrase `Good to thelast drop' used by Maxwell House ever since; that distances between Tibetan villages are sometimes reckoned by the number of cups of tea needed to sustain a person (three cups being roughly 8 kilometres); and that John Pemberton's original recipe for Coca-Cola included not only kola extract, butalso cocaine.Whether you are a sophisticated consumer of cabernet sauvignon and Kenya AA or just someone who needs a cup of coffee in the morning and a cold one after work, you will find Buzz to be an eye-opening, informative, and often amusing look at two substances at once utterly familiar and deeply mysterious.