- The Ethical Revolution of Minority Shareholders 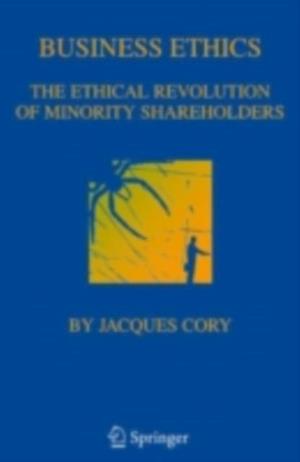 'Morten: And what are we going to do, when you have made liberal-minded and high-minded men of us? Dr. Stockman: Then you shall drive all the wolves out of the country, my boys!' (Ibsen, An Enemy of the People, Act V) The theoretical and empirical research of this book describes how the traditional safeguards of the rights of minority shareholders have failed in their duty and how those shareholders have remained practically without any protection against the arbitrariness of the companies and majority shareholders. The law, the SEC, society, boards of directors, independent directors, auditors, analysts, underwriters and the press have remained in many cases worthless panaceas. Nevertheless, in the Ethics of 2000 new vehicles have been developed for the protection of minority shareholders, mainly the Internet, transparency, activist associations and ethical funds. Those vehicles give the shareholders at least the chance to understand the pattern and methods that are utilized to wrong them and give them a viable alternative for investment in ethical funds. The new vehicles will prevent minority shareholders from using the Armageddon weapon, by ceasing to invest in the stock exchange and causing the collapse of the system, that discriminates against them.