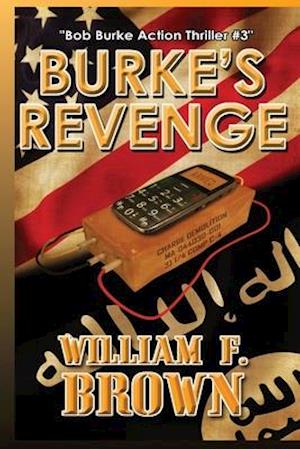 Bullets, bombs, and mayhem! Bob Burke is back once more, amid terrorists, bombs, bullets. He's the most lethal killing machine the US Government ever produced, and when a home-grown ISIS cell attacks Ft. Bragg, he isn't about to back off. Book #3 of the Bob Burke action adventure series. 4.6 Stars on 131 reader reviews!

Sometimes you go looking for trouble, and sometimes trouble comes looking for you. After his adventures in Burke's War and Burke's Gamble, All he wants now is to settle down with his family and let Iraq, Afghanistan, and the 'dustups' with the Chicago and New York mobs fade away like bad memories.

Undersized and always underestimated, 'The Ghost' is often dismissed as merely "the telephone guy," but He's the most lethal killing machine the US Government has ever produced, and this home-grown ISIS cell just made a big mistake in Book #3 of the Bob Burke action adventure series.

Born in the rubble of Syria and Iraq, and bred on battlefields across the Middle East, the terrorist cell is led by a blond-haired blue-eyed American. Through pistol shots in the night, assassinations, and C-4 plastic explosives planted throughout the sprawling Fort Bragg US Army Post, he is waging a war of classic terror as relevant as this morning's headlines. The FBI and CIA can't seem to stop them. The Army's own CID can't stop them. But Bob Burke and the Merry Men and Women of Sherwood Forest can.

when the bombs and the violence kills a close friend and one of their own, it falls to Bob, Ace Randall, a female CID agent, the Geeks, a maverick helicopter pilot, and one large pit-cat, to hand out a full measure of revenge before the terrorists strike a crippling blow at an even more important US military target only 200 miles away.