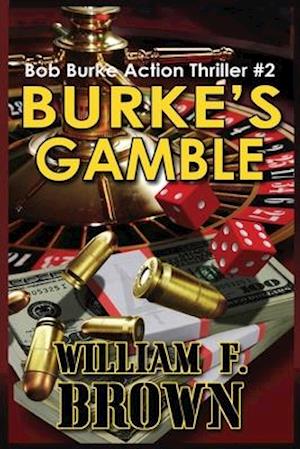 Bullets, Bombs, and more Mayhem! Bob Burke is back! Welcome to 'American Sniper' meets 'The Godfather,' Round #2, or Bob Lee Swagger takes on the New York City mob. 4.7 Stars on 240 reader reviews.

Bob Burke is a former Army Ranger and Delta Force commander, and one of the quickest, most lethal forces of nature this country has ever produced. When one of his old NCOs is tossed out the fifth story window of an Atlantic City casino run by the infamous Genovese and Lucchese NY mob families, someone's going to answer, and payback's gonna be a hoot!

Slight of build and easy to dismiss, Burke shed his uniform and left Fort Bragg. He now runs a sophisticated telecommunications company in Chicago. Often mistaken for 'the telephone guy,' he is a highly-decorated West Point 'ring knocker,' who spent four tours in Iraq and the rugged mountains of Afghanistan running deadly 'special ops' missions. He and his men don't take kindly to one of their own being murdered, but this time it won't be a simple 'Gumbah' hunt with sniper rifles in a Chicago Forest preserve. The target is a Mafia Don holed up in the penthouse of a large hotel and casino complex, backed by a dozen mob gunmen plus and an elite team of foreign Special Ops mercenaries brought in to take down Bob Burke.

While there's always a place for a Barrett .50-caliber sniper rifle or two, and his old Delta Force sergeants, this time Bob calls on a pair of baby-faced computer Geeks, a three-star Army General, a Chicago homicide detective, a female Air Force pilot, a Russian computer programmer, one of the world's most renowned pickpockets on an overnight.' pass from Cook County Jail, and his own new wife, Linda. From stealth helicopters to luxury yachts, fishing trawler's, and bodies in 55-gallon oil drums, the action is non-stop. But this time, Bob and his crew aren't going to shoot it out in the woods, they're going to take the Mob's money, all of it!

If you like a good murder mystery suspense thriller, put this fast-moving Bob Burke series Delta Force action adventure novel into your Cart. It is another war and military best seller novel from the author of "Burke's War,' 'The Undertaker,' 'Amongst My Enemies,' 'Thursday at Noon,' "Aim True, My Brothers,' 'Winner Lose All,' and 'Cold War Trilogy' three book boxed set. Pick one up and enjoy!