- The Role of Photojournalism in Mediating Reality 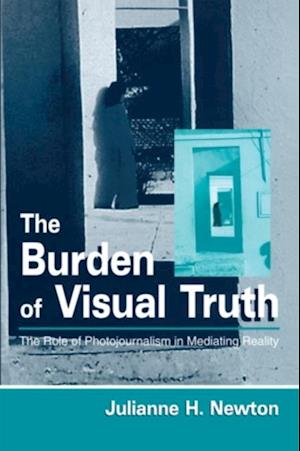 As the visual component of contemporary media has overtaken the verbal, visual reportage has established a unique and extremely significant role in 21st-century culture. Julianne Newton has prepared this comprehensive analysis of the development of the role of visual reportage as a critical player in the evolution of our understanding of ourselves, others, and the world. The Burden of Visual Truth offers a first assessment of the role of visual journalism within the context of the complex, cross-disciplinary pool of literature and ideas required for synthesis. Newton approaches the subject matter from several perspectives, examining the theoretical and ideological bases for visual truth, particularly as conveyed by the news media, and applying relevant research on photojournalism and reality imagery to contemporary newspaper, broadcast, and internet professional practice. She extends visual communication theory by proposing an ecology of the visual for 21st century life and developing a typology of human visual behavior. Scholars in visual studies, media studies, journalism, nonverbal communication, cultural history, and psychology will find this analysis invaluable as a comprehensive base for studying reality imaging and human visual behavior. The volume also is appropriate for journalism and media studies coursework at the undergraduate and graduate levels. With its conclusions about the future of visual reportage, The Burden of Visual Truth also will be compelling reading for journalism and mass communication professionals concerned with improving media credibility and maintaining a significant course for journalism in the 21st century. For all who seek to understand the role of visual media in the formation of their views of the world and of their own identities, this volume is a must-read.