- A Perverse View of Architecture

indgår i serie Buildings Must Die 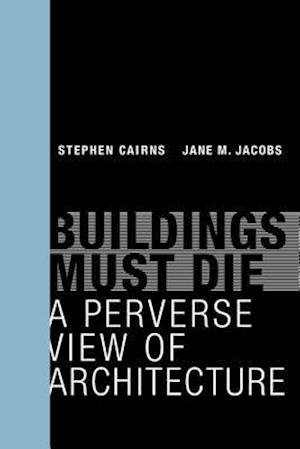 Part memento mori for architecture, and part invocation to reimagine the design values that lay at the heart of its creative purpose.Buildings, although inanimate, are often assumed to have "life." And the architect, through the act of design, is assumed to be their conceiver and creator. But what of the "death" of buildings? What of the decay, deterioration, and destruction to which they are inevitably subject? And what might such endings mean for architecture's sense of itself? In Buildings Must Die, Stephen Cairns and Jane Jacobs look awry at core architectural concerns. They examine spalling concrete and creeping rust, contemplate ruins old and new, and pick through the rubble of earthquake-shattered churches, imploded housing projects, and demolished Brutalist office buildings. Their investigation of the death of buildings reorders architectural notions of creativity, reshapes architecture's preoccupation with good form, loosens its vanities of durability, and expands its sense of value. It does so not to kill off architecture as we know it, but to rethink its agency and its capacity to make worlds differently. Cairns and Jacobs offer an original contemplation of architecture that draws on theories of waste and value. Their richly illustrated case studies of building "deaths" include the planned and the unintended, the lamented and the celebrated. They take us from Moline to Christchurch, from London to Bangkok, from Tokyo to Paris. And they feature the work of such architects as Eero Saarinen, Carlo Scarpa, Cedric Price, Arata Isozaki, Rem Koolhaas and Francois Roche.Buildings Must Die is both a memento mori for architecture and a call to to reimagine the design values that lay at the heart of its creative purpose.

Forfattere
Bibliotekernes beskrivelse Part memento mori for architecture, and part invocation to reimagine the design values that lay at the heart of its creative purpose. 50 b&w illus., 1 chart; 51 Illustrations, unspecified