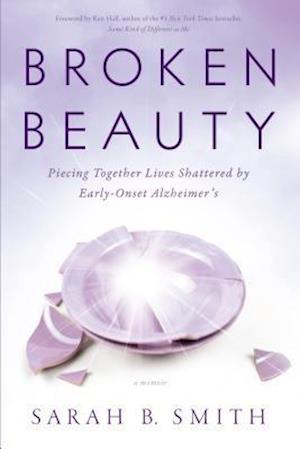 In the world of Early-onset Alzheimer's, here is a book all about life, love, and hope.

​Broken Beauty is the story of Sarah Smith's mother--known as "Beauty" to her family--and her family's journey through the devastating world of Early-onset Alzheimer's. Smith was a young mother in her thirties when her own mother's illness struck, so the family's shock and pain at the disease's manifestations is nearly unbearable. Not only is Beauty still young and fit; she is also Sarah's best friend. This powerful and personal story about a daughter facing the unthinkable and the love she found to carry her through will touch the hearts of everyone who reads it.

Sarah Bearden Smith is a housewife, mother of three, and a woman of deep faith, who has lived in Texas all her life. Sarah was born and raised in the Houston area, and remained there until her departure for the University of Texas at Austin, where she was a speech communications major, varsity cheerleader, and a member of Tri Delta sorority. After her marriage to Thad Smith in 2002, the couple moved to Dallas, Texas. During their years in Dallas, Sarah and her husband have served on various boards and committees, including the Greer Garson Gala, Presbyterian Hospital Healthcare Foundation, East-West Ministries, AWARE Dallas, and Providence Christian School of Texas. They actively serve with their children in assisted living and memory care facilities and support organizations such as Council for Life, Alzheimer's Association, Women's Alzheimer's Movement, and Community Bible Study. Sarah and her family are members of Watermark Community Church.