British Way in Warfare: Power and the International System, 1856-1956

- Essays in Honour of David French 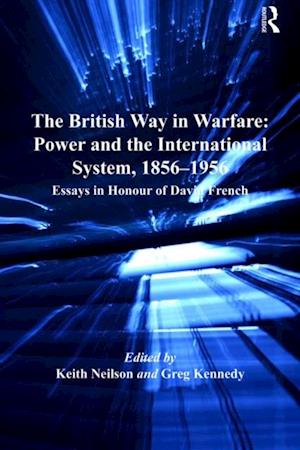 In his groundbreaking book The British Way in Warfare (Routledge, 1990), David French outlined the skillful combination of maritime, economic and diplomatic power employed by Britain to achieve its international goals. Almost two decades later, this collection offers a reassessment of French's thesis, using it as a lens through which to explore Britain's relationship with various kinds of power (military and civil) and how this was employed across the globe. In particular, each essay addresses the ways in which the use of power manifested itself in the maintenance of Britain's place within the international system between 1856 and 1956. Adopting twin methodologies, the collection firstly addresses the broad question of Britain's relationship with other Great Powers and how these influenced the strategies used, before then testing these with specific case studies. By taking this approach, it is possible to discern which policies were successful and which failed, and whether these remained constant across time and space. Measuring Britain's strategy against her commercial, imperial, and military competitors (including France, the USA, Italy, Germany, and Russia) allows intriguing conclusions to be drawn about just how an essentially maritime power could compete with much larger - and potentially more powerful - continental rivals. With contributions from an outstanding selection of military scholars, this collection addresses fundamental questions about the intersection of military, economic and diplomatic history, that are as relevant today as they were during the height of Britain's imperial power. It will prove essential reading, not only for those with an interest in British military history, but for anyone wishing to understand how power - in all its multifaceted guises - can be employed for national advantage on the international stage.