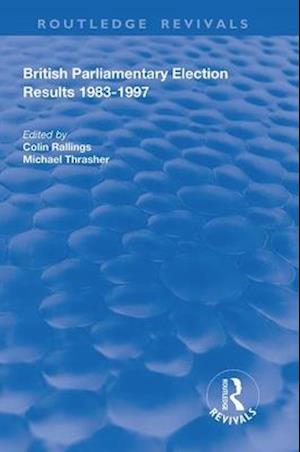 First published in 1999, this is the sixth volume in a series of definitive reference books recording constituency election results. This volume gives the 1983, 1987 and 1992 general election results in each constituency as well as the outcome of any by-elections which took place up until the dissolution of parliament in 1997. The name, party label, votes and vote share for each candidate are shown. The change in party vote share between elections helps chart the ebb and flow of electoral opinion throughout this period. Each constituency result also lists the electorate and turnout for each election as well as showing the winner's majority, both in terms of votes and percentage lead over the second placed candidate. Summary statistics for the three general elections record votes cast and seats won across the nations of the United Kingdom. A comprehensive index will allow the reader to identify which candidates fought which constituency in their efforts to be elected to the House of Commons.