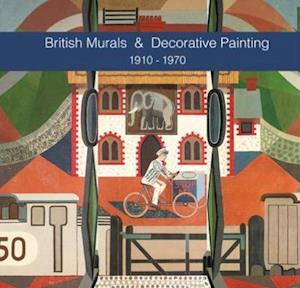 The murals that were produced in this country in the twentieth century remain as one of the great inventive achievements in modern British art. Highly original in their approach to design, balancing varying degrees of modernity or tradition, they demonstrate the creative drive of their makers and contain singular expressions of the aesthetic, personal and social concerns that typify the ages from which they come. Some are celebrations of simple human pleasures, perhaps to decorate a refreshment room, an ocean liner or a dining room.Others are intended to be the highest expressions of their art, ambitious allegorical or decorative compositions that like the frescoes of theRenaissance would speak through the ages to later generations. The individuals and committees who commissioned them similarly believed they would both represent the best that Britain had to offer and mark the high accomplishment of contemporary society, elevating the public and private spaces they occupied and inspiring moral purpose.This catalogue was published on the occasion of the exhibition 'British Murals & Decorative Painting 1910-1970' which took place at the Fine Art Society - London (13 February - 9 March 2013) in association with Liss Llewellyn Fine Art. It coincided with the Sansom & Co publication British Murals & Decorative Painting 1920-1960.