Bringing Down the Moon

indgår i serie Mole and Friends 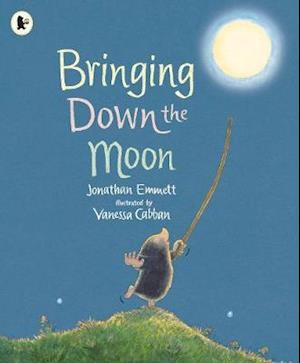 Meet the little mole who thinks a lot and join him on his quest to bring down the moon."Hot-diggerty! Whatever's that?" exclaims Mole as he burrows out of the ground one night and catches sight of the moon. He thinks it's the most beautiful thing he's ever seen and he wants it, so he sets about trying to pull it down - to no avail. When all his efforts prove to be in vain, he suddenly notices the moon's in a puddle at his feet and reaches to pick it up and breaks it. Poor Mole is inconsolable, until he is shown that the moon is not broken at all, but just as beautiful as ever, hanging in the sky like a bright silver coin. And it's not as near as it looks!

Forfattere
Bibliotekernes beskrivelse Meet the little mole who thinks a lot and join him on his quest to bring down the moon.