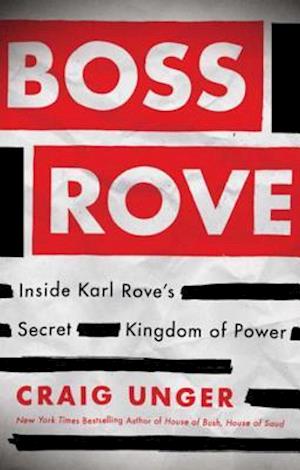 The epic 2012 presidential contest between President Barack Obama and Republican candidate Mitt Romney represents the stunning comeback of GOP boss Karl Rove, the brilliant political operator whose scorched-earth partisanship infamously earned him the moniker Bushs Brain and provoked some observers to label him as dangerous to American democracy. How, after leaving the Bush administration in disgrace, did Rove rise again, and what does it mean that he is back in power? This timely, meticulous account by New York Times bestselling investigative reporter Craig Unger provides the surprising and disturbing answers. KARL ROVE, the man who masterminded the rise of George W. Bush from governor of Texas to the presidency, who advised Bush during two wars in Iraq and Afghanistan, who some claim helped seize the 2004 election for Bush, and who was at the center of the Bush administrations two biggest scandalsthe Valerie Plame Wilson affair and the U.S. attorneys scandalis back. Since exiting the Bush administration, Rove has quietly become the greatest Republican power broker in the country. His pulpit is much vaster than his role as a commentator on Fox News and his regular columns for the Wall Street Journal suggest. His real strength is his ability to mobilize immense sums through the SuperPAC American Crossroads and similar organizations, and channel that money on behalf of Republican candidates. Knowing that Rove remains connected and powerful, Unger investigates Roves politically controversial activities of times past, shedding important new light on them, and shows their relevance to his activities today. He scrutinizes Roves roles in the Valerie Plame Wilson affair, the U.S. attorneys scandal, the strange events in Ohio on the night of the 2004 presidential election, and much more. But now that Rove is back in control of GOP political strategy and funding, there are pressing new questions: How did Rove do an end around on the Republican National Committee and build his own more powerful organization? In what ways did he subtly and not so subtly influence the 2012 Republican primary process? What did he say (and do) regarding candidates Rick Perry, Herman Cain, Michele Bachmann, Newt Gingrich, and Rick Santorum? How did he placate the Tea Party, which he privately despises, even as he cleverly marginalized its importance? How did he and Mitt Romney draw closer as the GOP convention neared? How will he further benefit from a Romney victory? And if Romney loses, why will Rove remain powerful? Unger has the answers. As demonstrated in his previous books, Unger is adept at combining incisive reporting with the journalistic record to create a master narrative that sheds new light on a political subject. Detailed, fascinating, and entertaining, Boss Rove will interest not only readers who want to know more about the 2012 election but also those keen to understand the forces endangering American democracy. This up-to-the-minute journalistic report sheds crucial light on Roves vital behind-the-scenes role in this falls presidential election and in the future of American politics.